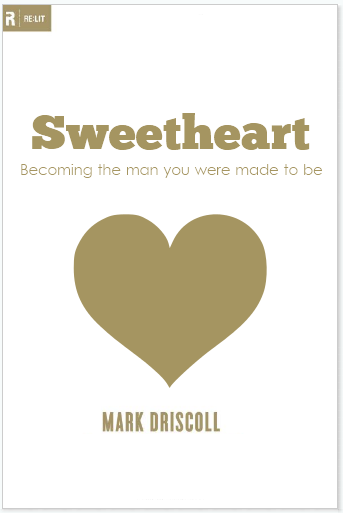 I was privileged to receive a pre-publication copy of Mark Driscoll’s forthcoming book, thanks to the good folks at re:Lit. It should be appearing soon at all good booksellers, so here is my review to whet your appetite.

In this book, Driscoll explores what it means to be a “real man”, lamenting the fact that too many Christian guys have got completely the wrong idea about how they should behave. He exposes the lie that manhood is somehow all about courage and strength, and calls us to lay down the tough guy exterior to reveal your “inner sweetheart”.

The book is organized into three main sections, each exploring a different facet of biblical manhood:

A moving chapter on John 11:35 demonstrates that real men cry. Lots. He tells the tragic story of one pastor who was so hard-hearted he remained dry-eyed right the way through Sleepless in Seattle. He explains how in choosing Peter, himself a cry-baby (Matt 26:75), Jesus shows the type of sensitive soul that he is looking for in church leadership.

The way some people talk, you might think that being a man is all about feats of strength and endurance, winning wrestling matches or climbing mountains. But Driscoll shows that the real way to be a man is to care for beauty. Those men closest to God have always enjoyed what some might consider “girly” interests. He illustrates this with examples of Calvin’s love for poetry, Stott’s love for bird-watching, and Don Carson’s gift for interpretive dance.

One of the real problems with being a macho man, is that by confronting problems you could get hurt. And God doesn’t want any of his little preciouses getting hurt, does he? Driscoll shows how the great masculine heroes of the Bible knew when to run and hide. The great apostle Paul set the example for us by hiding inside a basket rather than facing up to his opponents (Acts 9:25).

Of course, the greatest example of what it means to be a man is Jesus. Driscoll unpacks from Matt 12:19-20, the need to avoid conflict, speak quietly, and have gentle and soft hands (he recommends this hand cream).

Verdict: This makes essential reading for Christian men, who are so easily made to feel ashamed of their love for lime green cardigans and herbal tea, and suffer under the crushing pressure of being expected to achieve things or take a lead. Driscoll sets us free from all that false guilt, and proves once and for all that the true symbol of manhood is not the sword, but the daisy.

The first thing that stands out about this book is the striking artwork (some of which is on display at the book’s website). From the cover design to the typesetting and illustrations at the start of each chapter, this book is comfortably one of the best presented Christian books I have come across.

A similar high standard of creativity is on display in the way the book is organised. This is a book on the doctrine of the atonement, and works its way through some detailed theology. But the way it is presented is quite unique.

Each chapter starts by briefly telling the story of a person known to Mark Driscoll. Some are Christians, others are not. Many are struggling with the consequences of shocking episodes of their past, whether that be being betrayed or abused, or being an abuser themselves. But a broad spectrum of people are covered (including “good Christian” David, and “pastor’s kid” Gideon), so it is likely that most readers will find at least someone they can identify with.

Having introduced the person, Mark Driscoll writes them a letter. In it he seeks to explain how a specific aspect of the doctrine of the atonement is directly relevant to their situation. These letters are forthright and direct, but also heartfelt and rich in biblical theology. Those who have heard Driscoll preach will know what to expect. He never minimises or excuses sin, and is quite willing to speak of God’s anger at it and the threat of hell, but holds out the good news of grace and forgiveness through Christ for even those who have committed vile offenses.

At the end of each chapter, Driscoll’s co-author, Gerry Breshears answers three or four common questions relating to the doctrine presented in the chapter. The questions are well chosen, and the short and helpful answers complement the letters nicely.

So what does the book teach about the atonement? Well right from the start, Driscoll emphasises that it is multi-faceted. One description or metaphor alone will not do justice to the cross. At the same time, the concept of substitution is clearly presented as the primary model. He takes the example of the scapegoat and sin offering from the day of atonement to illustrate that propitiation and expiation go hand in hand.

We are of course living in times where there is controversy over the doctrine of the atonement, with the idea of penal substitution coming in for severe criticism. This book robustly defends it as a fully biblical concept, but does not fall into the trap of ignoring or minimising other ways in which we should reflect on the significance of the cross. For example, the first chapter in the book deals with Jesus as Christus Victor, while another presents the concept of Christus Exemplar.

I won’t go into all the topics he covers, but suffice to say that there are some very clear explanations of many important doctrines in this book. Driscoll has a knack for presenting familiar material in a fresh way, and the fact that he writes each chapter as a letter to a real person keeps it very practical, and never merely abstract theology.

While I wouldn’t say this book has knocked John Stott’s “The Cross of Christ” off the top of my list of favourite books on the atonement, it deserves a special place of honour simply for the superb presentation of the material. It would be beneficial for anyone who wants to teach on the atonement, or who is involved in counselling to read this book, to see more clearly how to apply the message of the cross to a variety of difficult situations. But this book is also appropriate for any Christian who simply wants a deeper understanding of the message of the cross.

I didn’t originally intend to read this book as I had listened to a number of the sermons in Mark Driscoll’s Vintage Jesus series, but a friend lent it to me and I’ve been working my way through over the last month. Driscoll co-authored it with Gerry Breshears, but it would appear that Breshears is more of an editor as Driscoll speaks regularly in the first person.

In terms of style, it’s typical Driscoll. Easy to read, funny, contemporary, direct, shocking and borderline offensive in places. I had supposed at first that the book would be presented as an “introduction to Jesus” for non-Christians, and while it may be appropriate for that, it is more of a book form of the sermon series, and so will often rely on proof-texting from the Bible to make various theological points. It is full of fascinating anecdotes and quotes and could be a good source of material for preachers to borrow from, although it is quite America-centric.

The first chapter sets out to prove that Jesus is “God”. I would have thought it might be good to discuss what this means in terms of the Trinity, but the focus is solely on proving Jesus’ divinity. This is then complemented by a chapter on Jesus’ humanity (in Dricoll-speak “Jesus was a dude”). The third chapter, “How did people know Jesus was coming?” deals with all the prophecies and promises concerning Jesus’ coming in the Old Testament. This raised some hermeneutical issues for me, as many of the Scriptures he cites clearly are not straightforward “promises” as he puts it. Rather, I see them as fore-shadowings, things that could be understood after the Messiah coming, rather than being some kind of cryptic crossword clues to be solved in advance. However, I do commend his Christo-centric approach to Scripture:

no matter how many verses are used, the Bible has not been rightly understood or proclaimed unless Jesus is the central focus and hero.

One of the strengths of the book is that each chapter is followed by a set of common questions and objections, and Driscoll don’t duck any hard questions.

His chapter on Jesus as Prophet, Priest and King had some interesting insights into the tendency of Fundamentalism, Evangelicalism and Liberalism to emphasise only two of those roles at the expense of the third.

Then follow some chapters dealing with the subjects of the virgin birth and the atonement, and he takes the opportunity to distance himself from various emerging church leaders who doubt or deny a literal virgin birth and oppose the concept of penal substitutionary atonement. He argues for a multi-faceted understanding of the meaning of Jesus’ death and resurrection, which has at its core the penal substitionary model but also includes concepts such as Christus Victor. He lost me a little on his fine distinction between paradise and heaven before and after the cross though.

The chapter on the resurrection presents a variety of evidence for believing its historicity as well as the theological importance and implications. He then turns to consider the importance of worshipping Jesus, and here is some of the strongest material in the book as he explores the various forms of idolatry in Western culture, the chief of which is self-idolatry.

There is a chapter on the difference Jesus has made in history. This includes a variety of answers to those who suggest that Christianity has made the world worse, not better. He also takes on some of the theologically liberal ideas of the Jesus seminar. The final chapter is on the return of Jesus. Refreshingly he doesn’t set out a timetable of when it will happen (choosing to mock those who do), but rather talks about what Jesus will do when he returns, which includes a frank discussion of judgement and hell, as well as his bringing of recreation and shalom.

Can I recommend this book? Certainly, I think it is a great book for Christians who perhaps are not used to reading more solemn theological tomes, but want to understand more of the Biblical teaching about Jesus. It could also be good read for a non-Christian who has had some exposure to Christianity. Driscoll is to be commended for his willingness to tackle the tough questions, and to challenge and call us to look to Christ and worship him. It’s not a perfect book, and not everyone will appreciate his style, but there could be no more edifying subject matter than the person and work of Christ.