I have made a habit of writing short reviews of Bible weeks I attend on this blog, so I’ll give a brief account of Together at Plumpton 2012. If I were to summarise it in one word, it would be “windy”.

The conference began on Wednesday evening, with a talk from Dave Devenish on the parable of the great banquet. Then on the Thursday, he gave a two part series on the biblical metanarrative, surveying the OT in the morning, before going on to the NT in the evening. I seem to remember a lot of discussion in blogs several years ago on the way evangelicals have failed to tell the story of the whole Bible, preferring to extract out ‘principles’ and ‘doctrines’, and teaching those directly. But Dave Devenish has been something of an advocate in newfrontiers for a return to telling stories as a significant part of our teaching, and it was interesting to see him use this technique to good effect.

Unfortunately, Thursday night I was on babysitting duty, and with very strong winds, ended up spending most of the evening helping people whose tents were broken. Several people left there and then, and after a sleepless night of gale force winds, even more people packed up their broken tents and left in the morning. 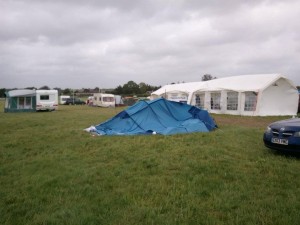 There was more drama to follow on the Friday as the violent rushing winds continued, and the main marquee had to be evacuated before Julian Adams got to speak. Our church marquee was next to fall, and by lunchtime with the wind unabating, most people with tents were fleeing the site.

Sadly, although our family tent was still standing at this point, our small tent for our two oldest children had been flattened, and as we were reliant on lifts from other campers to get all our family home, we reluctantly decided to go home too. It was the first time we have actually had to abandon a Bible week midway through. The closest we previously came was Stoneleigh 99 when severe flooding meant we had to spend a night on a friend’s floor in Birmingham.

The speaker we missed hearing due to going home early was, ironically, our own pastor, Martyn Dunsford. Hopefully he can work some of the material he brought into his sermons back at KCC.

It is interesting the way that these “together at” conferences have mirrored the structural changes to newfrontiers. Back in 2001, Terry Virgo was the figurehead of the movement, and there was one big central Bible week called Stoneleigh. Now, we have multiple “apostolic spheres”, each with its own smaller scale conference. Although these may feel less “impressive” than a huge event like Stoneleigh, they have a bit more of a missional feel to them – a small band of churches who are working together to see the kingdom expanding through growth in our own churches and through planting into the UK and the nations. In this sense these conferences are a good example of the “creative destruction” Matt Hosier blogged about recently.

Update: The talks from Plumpton 2012 are available to listen to here.